I have become the "unacceptable face" of Scottish nationalism 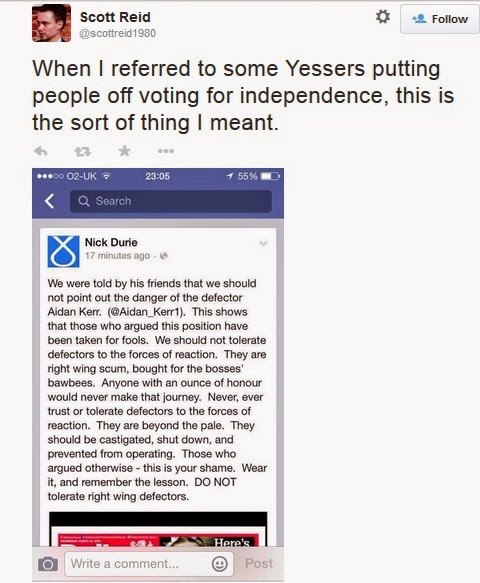 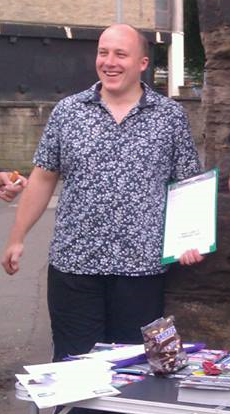 I have just had the bizarre and unexpected experience of becoming the unacceptable face of "Scottish nationalism."

If you have united Ross Greer and Stuart Campbell in condemnation of you it is worth taking a step back.

I am a little confused that journos from the mighty Daily Record consider my words so noteworthy they are worthy of retweeting, but for the record what I wrote was the following. (see right)

I am sorry if my intemperate tone has caused offence to the wrong parties.  Genuinely.  I am.  My intent was to communicate the following points.

1. The journalist Aidan Kerr was once considered a local stalwart of the forces of progressive social change, and democracy for Scotland.  He was elected leader of a student nationalist association.

2. As as insider Kerr developed a "map" - a picture of the social relationships, and the stories, anecdotes and power relationships between individuals within the democracy movement.

3. Kerr abandonned his apparently heartfelt beliefs when he became a professional journalist, and began writing scurrilous articles in support of the British establishment, for money.

4. This insider information, coupled with his willingness to surrender his principles for money has made Kerr dangerous.  The ultimate validation of this is the extent to which the Depute Editor for the Record is working his socks off to hype Kerr's output on social media.  People in the democracy movement should beware of such individuals, as they maintain links and sources of information, but they have no principles and are ultimately interested in money first and foremost.

This was the extent of my point.  Had I expressed it less trenchantly, or in the post modern 'ironic' way, I doubt very much the noble Aidan Kerr would be soliciting the views of the Green candidate for East Dunbartonshire.

Let me explain why I reacted so hostilely to Kerr's latest (now frontpage) attempts to troll for the Daily Record.

1. During the course of canvassing I have met a great many people who - as a result of the system of benefit sanctions Kerr, now a Unionist, upholds - could not feed their children.  In one discussion in Possil I met a woman with three kids who had not eaten in days, who was intent on voting NO, because in her eyes Scotland was worth nothing.  She voted YES, after I had spoken to her.  Her understanding of which parliament controlled which powers and who was enacting which policy was poor.  She had been reading the Unionist red top newspapers that Kerr now plies his trade for.  The same Unionism had handed down to her a benefit sanction of three months with no money, the cause of which she still did not know or understand.  Kerr has joined in this system of misinformation, exclusively for the money, against his previous principles.  Meantime in the month of August 2014 my residents association held a crisis meeting because over 600 people in my local area had relied on food parcels between April and May.  By October that number was up to 1000.  My community voted YES overwhelmingly, but people like Kerr changed their allegiance when the money flowed the right way.

I know how I feel about this.  It makes me intemperate and angry.  I refuse to apologise about being angry about such naked injustice, or towards those who can react dispassionately towards such evil and vindictive things, or ignore the causes of them, when Scotland's second largest red top flashes pound notes.

2. People like Kerr have deep roots, which they will use as contacts.  Kerr has his defenders in the movement, who will defend him every bit as vociferously as David Clegg.  Clegg now considers Kerr's attack pieces frontpage news.  Clegg's paper is one of the primary institutions upholding food poverty, reaction, and two faced concern for poverty.  Lots of pathos, with an exhortation to vote for monetarism.  Call me an extremist every bit as much as you like, but I personally consider that seedy in the extreme.

3. Which is worse - being an intemporate mouth on social media with an audience of a few hundred fellow travellers, or writing a scurrilous piece of divisive and disingenuous claptrap which enters the households of 300,000 Scots and tells them to know their place?

4. Ross Greer and Stuart Campbell united on the same side - can't be doing half bad, eh. ;p

So mea culpa, and I'm sorry for using the wrong tone, and being very shouty.  I am human and stupid.  But that doesn't mean we should be taken for fools.
Posted by Nick Durie at 18:04